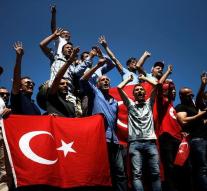 - The failed military coup Friday was supported by only a small part of the army. It is not yet clear how many people have taken exactly the seizure of power.

President Tayyip Erdogan of Turkey which said Wednesday in an interview with the Arab television station Al Jazeera.,, It is clear that it is a minority of the armed forces. This terrorist organization wanted a minority to the majority will would impose. '

So far, Erdogan has in terms of debt mainly pointed to Fethullah Gülen and designated him as the mastermind behind the coup. He calls Gülen and his followers regularly a terrorist organization.