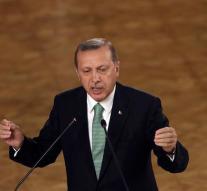 He takes the blame the governments concerned that they have not shown solidarity after the failed coup. Countries that are more worried about the fate of traitors then can not be friends of democracy in Turkey.

Erdogan said in a speech from the presidential palace in the capital Ankara that he charges filed against people who have offended him dropped. That's a one-off gesture, motivated by feelings of unity after the coup attempt.