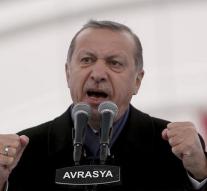 ankara - It stands for the Turkish President Recep Tayyip Erdogan doubt that the murderer of the Russian ambassador was a member of the Gülen movement, which was according to the head of state also behind the coup attempt last summer in Turkey. Erdogan said that this is evident from the place where the suspect has received education and the relationships he maintained.

The Russian ambassador Monday was shot by a Turkish policeman in civilian clothes at the opening of an exhibition in the Turkish capital. The agent would have been against the Russian military intervention in Syria.

In connection with the failed coup against Erdogan are about 40 000 people in custody. The authorities announced Wednesday that another 2,000 teachers and other employees of educational institutions have been suspended because of possible links with the coup plotters. For this reason, in the months before that dismissed or suspended tens of thousands of civil servants and military personnel and members of the security forces.