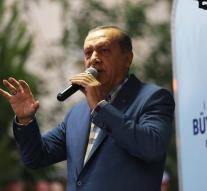 - Turkish President Recep Tayyip Erdogan said Sunday that the death penalty after the failed coup attempt of military personnel should be introduced without delay again. He said the government in this debate goes with opposition parties.

Erdogan spoke to supporters at his home in Istanbul which called for the death penalty for the coup plotters.,, We can not ignore this requirement, '' he said.

In Turkey, no death sentences have since 1984 carried out. The country scrapped the death penalty in 2004 of the Code, in order to meet accession requirements of the European Union.


Erdogan called on his supporters also streets and squares certainly occupied until next Friday to hold, because the threat of a coup has not completely subsided.