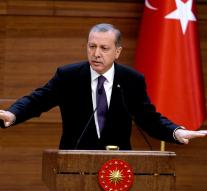 ankara - The Turkish parliament should quickly talk about a new constitution. It argued Turkish President Recep Tayyip Erdogan Wednesday in his first speech after the election victory of his AK Party. It is Erdogan's wish that the President in the new constitution gets to say.

Erdogan announced that Prime Minister Ahmet Davutoglu with leaders of the opposition will discuss a new constitution. If those talks fail, the president feels much for a referendum on the subject.