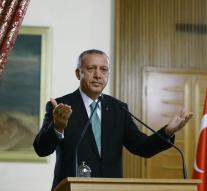 ankara - Turkish President Recep Tayyip Erdogan feels nothing to cancel the state of emergency. This can only be said if the fight against terrorism is in decline, the Turkish leader said Wednesday at a speech in Ankara.

The Turkish authorities entered the state of emergency following the failed coup last year. Since then, many tens of thousands of people have been arrested or fired because of possible involvement in the coup attempt. Erdogan did not conclude that lifting the state of emergency in the 'not too distant future' might be possible.

Premier Binali Yildirim said Wednesday that the end of the purifications within the armed forces seems to be in sight. Since the coup attempt, more than 7650 soldiers were fired, including 150 generals and admirals. 'The purification of the army has largely been completed by firing all sorts of soldiers,' said the prime minister. He added that all members of the Gülen network should 'pay the price for their betrayal. '