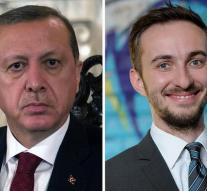 koblenz - Turkish President Recep Tayyip Erdogan has unsuccessfully appealed the decision of the Public Prosecutor in Mainz not to prosecute the TV comedian Jan Böhmermann for insulting a foreign head of state. The Attorney General of Rhineland-Palatinate, where the broadcaster ZDF is located, found the objection that Erdogan over his German lawyer against the decision made unfounded.

Böhmermann recited in March in his program Neo Magazin Royale a poem in which he was unsure whether you could call a goat fucker Erdogan and pedophile. The prosecutor in Mainz suggested last week that the line between satire and libel is not aware exceeded and refrained from challenging the presenter to court. His immediate boss in Koblenz gave him Friday alike.

Erdogan is now only can still go to the Supreme Court of the state to still enforce prosecution of Böhmermann. He has previous thirty days.