Home / World / Erdogan demanded the departure of US troops from Manbij 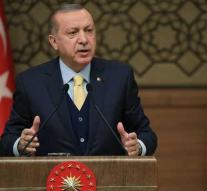 ankara - The Turkish president Tayyip Erdogan has demanded in the telephone conversation he made with Donald Trump on Wednesday that the American troops are withdrawn from the Syrian region of Manbij. That is what the Turkish foreign minister said on Thursday.

Erdogan wants to extend the Turkish military operation in Syria to Manbij, but as a result Turkish troops can come into confrontation with those of NATO's ally the United States.

Minister Mevlut Cavusoglu also said that Turkey will not attack Syrian government forces unless they counteract the Turkish operation.

Turkey is conducting an offensive in Syria against US-backed Syrian Kurds from the YPG.