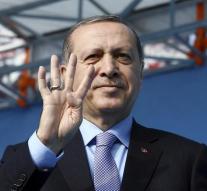 - Turkey says Iraq needs help to dislodge Islamic State from the Iraqi city of Mosul. The presence of Turkish soldiers in a military camp near the city, about 100 kilometers from the Turkish border, is required to prevent an attack against Turkey.

That said Saturday the Turkish President Erdogan at a ceremony in Rize, a city on the Black Sea. Turkey does not accept that Mosul is dominated by IS or 'any other organization,' Erdogan said. The United States supports an attack on Mosul, but the Iraqi government does not want Turkey to participate there.

Erdogan also said that rebels backed by Turkey in northwest Syria, advancing to the IS village Dabiq.