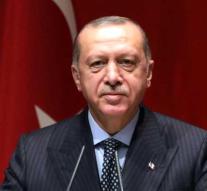 istanbul - The political opposition in Turkey has strongly criticized President Recep Tayyip Erdogan for accepting a luxury airplane from Qatar as a gift. Erdogan defended himself by saying that the Boeing 747 is not meant for himself, but that it is a gift to the Turkish state.

Turkish media had reported that sheikh Tamim bin Hamad al-Thani, the emir of Qatar, had given Erdogan a Boeing 747 with a value of over 420 million euros. The largest opposition party CHP doubted whether it was a donation and indicated that it is irresponsible that so much money is spent on a luxury Boeing because Turkey has major economic problems.

Erdogan then insured that the device was a gift, but that did not silence the criticism. The plane normally has room for about four hundred people, but has been rebuilt so that only 76 people can sit in the aircraft. According to the CHP, you can better call the Boeing 'a flying palace' than a plane from the state.