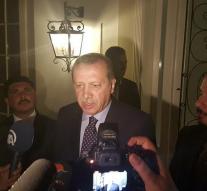 - Turkish President Recip Tayyip Erdogan Friday his supporters vowed that the coup perpetrators will not go unpunished. The coup leaders have committed high treason, according to him.

He appeared Friday around 03. 00 pm at the Ataturk Airport in Istanbul and spoke to his supporters. This happened shortly after Prime Minister Binali Yildirim announced that the situation,, largely '' was under control.

Erdogan said among other things that no force the will of the people can break. He also announced a purge of the Turkish armed forces.


He repeated his accusation that the culprits behind the attempted coup should be sought in the circles of the Gülen movement.,, Some soldiers have received their orders from Pennsylvania, '' Erdogan said, referring to the American home of his political opponent, the cleric Fethullah Gulen.