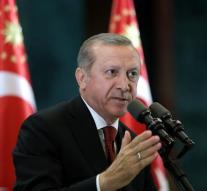 - Turkish President Recep Tayyip Erdogan has strongly condemned the attack on Tuesday at the Ataturk airport in Istanbul. He called on the rest of the world to act decisively against terrorist threats. World leaders reacted with horror.

Erdogan held in capital Ankara an emergency meeting with Prime Minister Binali Yildirim and commander of the land forces Hulusi Akar. 'Everyone should know that terrorist organizations do not distinguish between Istanbul and London, Berlin and Ankara, Izmir and Chicago, Antalya and Rome,' said the Turkish president.

From around the world were responded to the events in Istanbul, which certainly 36 deaths and 147 people were injured by three suicide bombers.


The White House says determined to continue its support to Turkey. According to the Republican presidential candidate Donald Trump is,, the danger of terrorism has never been greater. ' For his Democratic counterpart Hillary Clinton is attacking a reminder that the US can not withdraw.

After the European summit in Brussels, European leaders also expressed disgust at the attack. German Chancellor Angela Merkel spoke of a new cowardly act. 'I want to say to all the Turkish people that we have united in the fight against terrorism and we will support each other,' Merkel said.

'These terrorist acts follow other attacks, making the situation in Turkey is even more difficult,' were the words of French President Francois Hollande. He called to take action.