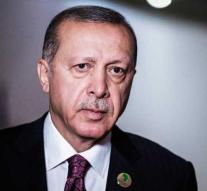 ankara - Turkish President Erdogan has repeated his appeal to the population on Saturday to sell dollars and euros to support the lira. The national currency has fallen into free fall because of concerns about the economy and the deteriorating relationship with the United States.

The US is conducting a punitive expedition against Turkey because it refuses to release the American preacher Andrew Brunson. Turkey suspects Brunson of terrorist activities, but according to the US there is no evidence for this. US President Donald Trump announced on Twitter on Friday to double import duties on steel and aluminum from Turkey.

The significantly cheaper currency means that the already hefty inflation in Turkey is threatening to rise even further. As a result, life is becoming more and more expensive for the Turkish population.