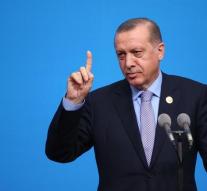 ankara - Turkey is preparing the largest ever operation against Kurdish militants. The action must take place in the southeast of the country. At the same time, steps are being taken to cleanse public institutions of supporters of the Kurdistan Workers' Party PKK.

President Erdogan of Turkey said Thursday that officials with ties to the Kurds in the public system are removed. He called it a 'key element' in the fight against the rebellious Kurds. The president said this in a speech in the capital Ankara for provincial governors. Thursday were immediately all 11. 500 teachers suspected of links with the PKK suspended.

The incursion of Turkish armed forces in northern Syria with the aim of creating a buffer zone against the terrorist organization Islamic State, will remain preserved, said Erdogan.