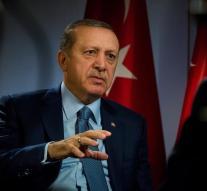 ankara - Turkey needs more time to combat the threat of terrorist organizations and it would therefore be a good idea to extend the state of emergency. That said, the Turkish President Recep Tayyip Erdogan on Thursday. The state of emergency was declared for three months after the failed coup last summer.

According to the Turkish president begins to see the world that terrorist organization Islamic State, Syrian Kurdish fighters and the army of Assad maintain each other. Erdogan thinks he can count on the support of its population for a prolonged emergency. ' The government will make the necessary assessment and then take necessary steps. ''

The current state of emergency expires in late October.