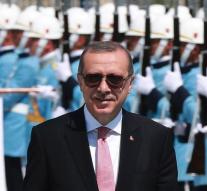 berlin - The chairman of the German liberal party FDP, the actions of the Turkish President Recep Tayyip Erdogan after the failed coup last month compared to that of the Nazis. According to Christian Lindner Erdogan is building an authoritarian regime in which all power is vested in himself, so he told Bild am Sonntag.

,, Because the rights and freedoms of the individual are no longer relevant, he can not be a partner of Europe, 'Lindner added. The FDP chairman sees parallels between Erdogan's behavior and the aftermath of the Reichstag fire in 1933. The Nazis called the fire in the German parliament building, a conspiracy of the communists against the government. Adolf Hitler used that idea then to justify curtailing civil liberties.

After the failed coup last month Erdogan that certain state institutions, but also education, had to be purified by followers of Gülen Hizmet movement. Who sat behind the coup attempt.