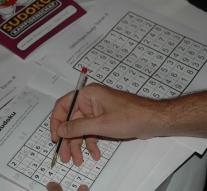 - A 25 year old man gets seizures as a sudoku puzzle he is trying to solve. A team of German doctors at the University of Munich , examines the remarkable thing. Presumably, the attacks are caused by a lack of oxygen that the patient suffered when he landed beneath an avalanche.

A study of the doctors was recently published in the journal Neurology Jama. The man seems to suffer from spasms in his left hand as he tries to solve a sudoku, Time Magazine reported on the basis of the publication.

According to doctors, it is the first time they encounter something. The attacks are related to a skiing accident the patient, where he was buried under an avalanche. This created a shortage of oxygen in his brains. After the accident began the muscles of the man occasionally pulling together. When he was in the rehabilitation clinic boredom wanted to make a sudoku puzzle, he had a seizure.

The attack stopped immediately when he weglegde the puzzle. An attack of the man was filmed for medical research. Since he got the attack , the 25- year-old man has stopped making sudokos. And since then - now five years ago - he had no more attacks.