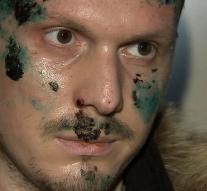 moscow - The 36-year-old Chechen Adam Osmaev, who, according to Russia, was involved in a conspiracy against President Vladimir Putin, survived an attack due to his wife's shooting skills. Armina Okoejeva switched the man who wanted to wrap her husband with shots in her chest, hip and back. She remained unharmed.

Osmajev is a Chechen-based Chechen who has ever been convicted of preparing an attack on Putin. In eastern Ukraine, he conducted a struggle supporting the government in Kiev.

The attack on Osmajev took place in Kiev. The couple had an appointment with a man who claimed he was a journalist but pulled a firearm during the conversation.

Okoejeva told the British newspaper The Telegraph that her husband was seriously injured, but his condition was stable. It is not clear whether the attacker survived the confrontation. Osmajev and Okoejeva take into account that the attacking officer worked on behalf of Moscow or the controversial Chechen leader Ramzan Kadyrov. Kadyrov came to leave Osmajev for Chechnya.