Home / World / Endangered mayor: 'I do not deviate' 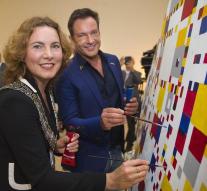 amstelveen - Mayor Miriam van 't Veld of Amstelveen received a threatening letter due to the arrival of refugees.,, The content was so disturbing that I did immediately reported to the police, '' the manageress Thursday wrote to the city council.

Van 't Veld did not say exactly what was in the letter, but spoke of a death threat. They did not go through the knees threats.,, We will not yield to threats, intimidation and empty slogans. Let us stand for the values ​​that are important to us together, '' said the mayor. Her reaction was shared by Registrar Pascale Georgopoulou via Twitter.

It is not the first time that a driver is under threat because of the refugees. Rather stepped mayor Miranda de Vries Geldermalsen been to the police because of threats.