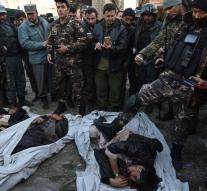 kabul - Afghan security forces have put an end to the siege of a guesthouse near the Spanish embassy in Kabul. In addition, three Taliban fighters have been slain. The attack of the Taliban was accompanied by heavy explosions and gunfire that lasted until early Saturday morning.

A Spanish policeman was hit during the attack and dies later in hospital. Five Afghan policemen were wounded or deceased, said the police chief in Kabul. In addition, there were ten wounded civilians, a Spaniard and nine Afghans, and were 47 Afghans and other foreigners rescued.

The authorities in the Afghan capital initially reported that the Taliban had attacked the Spanish Embassy. No embassy staff were injured.

The Taliban said that " a suicide attacker a guesthouse of the foreign occupier " was invaded. This detonated a car bomb. Three gunmen opened fire on the guards. Witnesses spoke of heavy explosions and gunfire.