Home / World / End of conflict in Yemen near 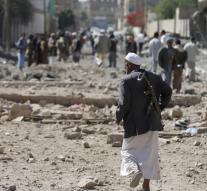 - The conflict in Yemen between the rebellious Houthis and the military coalition led by Saudi Arabia is nearing its end. That the Saudi Foreign Minister Adel al- Jubeir declared Wednesday.

The fight will take already seven months since the Shiite Houthi rebels are trying to expand their territory. They forced the government even leave the capital Sanaa and flee to Saudi Arabia.

The Saudi minister said the Houthis to consult meanwhile willingness expressed by the United Nations on the fight. According to al- Jubeir is crucial that the coalition almost all the area who had taken the Houthis, have recaptured.