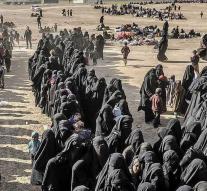 baghouz - Syrian forces have bombed one of the last remaining enclaves of the terrorist organization Islamic State (IS) in eastern Syria.

The US-backed Syrian Democratic Forces (SDF) have been waiting for the enclave for weeks, but have repeatedly been reluctant to allow the evacuation of civilians, including many women and children of IS terrorists.