Home / World / Emmanuel Macron wins, but who is he? 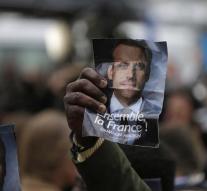 - France has elected Emmanuel Macron as their new president. What do we know about the 39-year-old politician?

Career: Macron was Minister of Economic Affairs under President François Hollande from 2014 to 2016. He presented himself in that cabinet as an independent candidate for the political center. Macron wants drastic economic reforms for France.

Plans: He enjoys the streamlining of public and private pension systems, and for unemployment benefit systems, now different for self-employed and wage-earners. And Marche! Aims at reducing unemployment to 7 percent of the labor force at 10 percent now, investment of 50 billion euros, and public sector savings of 60 billion a year. Macron wants more teachers at schools and smaller classes.

Private: Macron has been married since 2007 with the now 64-year-old Brigitte Macron-Trogneux teacher. They learned to know each other at the Jezuit School in Amiens where Brigitte taught Emmanuel.