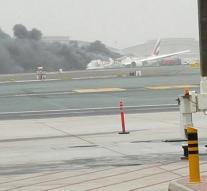 - A unit of Emirates Airline is on fire Wednesday at the Dubai airport. Notified by the company on Twitter. There is no information about any casualties.

The crew and passengers were able to leave on time presumably the device. According to unconfirmed reports, the fire originated after the plane had landed. The plane had departed from the Trivandrum airport in India.

Photos on Twitter shows that thick clouds of smoke coming from the unit. All traffic is stopped at the airport.

Emirates can confirm that an incident happened at Dubai International Airport on 3rd August 2016 at about 12.45pm local time.— Emirates airline (@emirates) August 3, 2016