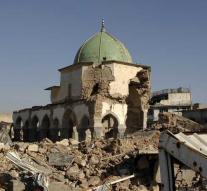 baghdad - The United Arab Emirates want to rebuild the large al-Nuri mosque in the center of the northern Iraqi city of Mosul.

The authorities in Dubai have announced that plan on Monday via Twitter. Warriors of Islamic State blew up the 12th century prayer house with the famous crooked minaret last year. This happened just before they were expelled from the Iraqi army with US support. Mosul was the Iraqi capital of IS.