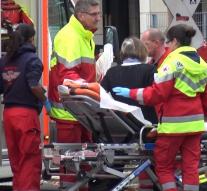 cologne - The emergency operation that the Cologne mayor candidate Henriette Reker has undergone Saturday , went well . The 58 -year-old politician was stabbed earlier in the day. In addition, she was among more hit in her neck. In the attack, four people were injured.

" The operation of Mrs. Reker has been extremely successful ", said Bernd Böttiger, department director of the University Hospital in Cologne. " We do not have life -threatening condition more. " It is expected that Reker will completely recover under normal conditions. A 44 year-old man has been arrested for the incident.

He would not agree with the refugee policy in Germany. Despite the incident go the mayoral elections in Cologne Sunday as usual. Reker serves as an independent candidate with, but is supported by the Greens, FDP and CDU.