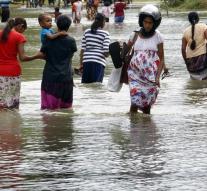 COLOMBO The death toll due to the severe emergency weather in Sri Lanka has increased further. The National Disaster Service said Wednesday that rescuers have so far saved 202 victims. 96 people are missing. Emergency care is arranged for almost 80,000 inhabitants.

According to the authorities, more than 600,000 Sri Lans are directly affected by the landslides and floods caused by a cyclone. Security forces have been deployed to restore drinking water supply and help residents to return home. Foreign Minister Ravi Karunanayake said that sixteen countries had sent aid goods, there is still more going on.