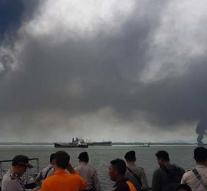 jakarta - A huge oil spill on the east coast of the island of Borneo threatens serious environmental damage. The authorities have declared a state of emergency. Efforts are being made to prevent further dispersal in the sea.

In total, an area of ​​more than twelve square kilometers for the Indonesian port city of Balikpapan is covered with oil. An enormous black cloud of smoke hung over the water. With oil fires, at least five fishermen have died since the weekend. In addition, many people in the area complain of breathlessness and nausea.

It is still unclear how the oil spill has arisen. Environmentalists are responsible for the Indonesian state-owned company Pertamina, which operates a large refinery in the Bay of Balikpapan. They suspect that the enormous quantities of oil ended up in the sea through a hole in a pipeline.

However, the authorities point out that the investigation into the cause of the accident is still under way. Pertamina has rejected the accusations.