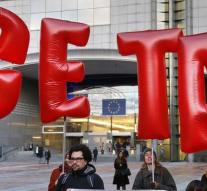 brussels - The Walloon government Thursday night to discuss the latest proposal that the EU's free trade agreement with Canada, CETA, must save. It also feverishly discussed in Brussels between the EU Member States. The Walloon Prime Minister Paul Magnette presented the Walloon parliament Friday in the outcome of the negotiations.

EU Commissioner Cecilia Malmström (Trade) explained Thursday new proposals on the table to attract the Walloons over. An 'interpretative declaration' to the Convention is attached to objections from the Walloons should remove without it four years ago completed treaty is amended.

The treaty would be on October 27 in Brussels by the EU and Canadian Prime Minister Justin Trudeau should be signed, but Magnette explained this week a bomb under CETA. He refuses Prime Minister Charles Michel to sign the treaty on behalf of Belgium. All Member States, ten regional parliaments and Canada must agree to the new statement.