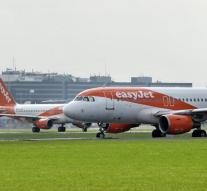 cologne - An Easyjet device has made a emergency landing on Saturday night after the pilot has a 'suspicious call'. The plane was from the Slovenian capital Ljubljana on its way to London, but landed in Cologne. The 150 passengers had to leave the unit via slides.

Everyone has been investigated by the police. Whether an arrest has been made is not clear. A piece of luggage that did not seem to belong to any of the occupants was destroyed. That reports Skynews.

It remains unclear what the pilot has heard exactly.