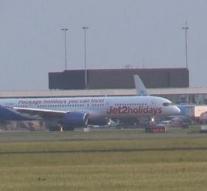 schiphol - A British Jet2 Boeing 757 made a successful emergency landing on Schiphol on Tuesday night.

The cause would be an acute fuel leak. The pilots reportedly closed a motorbike and wandered out to Amsterdam on the way from the Greek vacation island Kos to Leeds. The aircraft landed safely on Schiphol according to Air Traffic Management Netherlands. It is being inspected now.

According to a spokesman, the predominantly British passengers were not at risk. However, emergency services were ready due to a so-called 'Grip1 alarm', the least difficult phase. However, they did not have to take action.