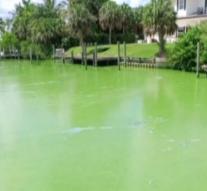 - By a massive algae plague the water at beaches in the south of the Florida transformed into a green gunk. And that precisely during a long weekend due Independence Day.

Sunbathers on the beaches of the American state can therefore forget a swim. The governor of the state, even the state of emergency declared for some popular beaches on the so-called 'Treasure Coast' at Palm Beach and Port St. Lucie. He speaks of a major economic disaster for the tourism sector.

The cause of the algae plague is a large inland lake, Lake Okeechobee, about 60 kilometers inland. This lake is highly polluted with waste from agriculture. Because the dykes around the lake are not too strong, the administrators need occasional water drain which eventually comes into the sea by many smaller water bodies. The Florida typically exuberant sunshine does the rest and causes algae growth.