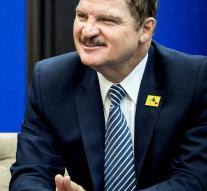 oranjestad - ' Mike Eman, stop polarize and brawl with the Netherlands! '' That message gets the Aruban prime minister along with opposition leader Evelyn Wever-Croes on the Caribbean island. The conflict with the Hague for the appointment of a new governor in Aruba is her an eyesore.

Eman today met Minister Plasterk (Kingdom Relations). The emergency meeting was set after the Aruban prime minister wrote a furious letter to Prime Minister Mark Rutte on the appointment of Alfonso Boekhoudt new governor. That is the deputy of the King Willem-Alexander of the island.

Eman Boekhoudt not pruimt. As the Aruban working for years as his minister plenipotentiary at The Hague. However, the preference of the Aruban government is to Angel Bermudez, the current Minister of Finance. According to Eman, the Netherlands, against all the rules put forward in Boekhoudt.

' In Aruba, many people however support Boekhoudt '' responds MEP party leader Wever-Croes. According to her, Eman 'waited too long' with the presentation of his own candidate. Moreover, they understand the Dutch reluctance for a close confidant of Eman like Bermudez. A governor should be just above the independent parties. Bermudez after all, is partly responsible for the painful and persistent high public debt.

Wever-Croes: ' Aruba faces major challenges such as high crime rates, a stagnant economy, failing health and a lot of social problems. Let stabbing our energy into fighting our own problems, and stop polarize. ''