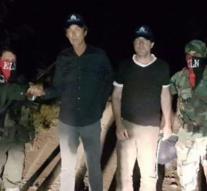 bogota - The ELN (National Liberation Army) behind the abduction of two Dutch journalists is one of the smaller guerrilla groups in Colombia. The largest is the FARC, where the Colombian government closed a peace agreement last year and almost disarmed. The ELN is still fighting and terrorizing parts of the country, especially in the northeast.

The ELN has been fighting against the Colombian government for more than fifty years, and abductions and bombings are an important weapon. The Marxist movement, now estimated to have 1500 to 2000 warriors, was founded in 1965 by radical Catholic priests inspired by the Cuban revolution. The larger Colombian Revolutionary Armed Forces (CAC) is estimated to have 6000 members.

Since January 2014, the government and the ELN conducted exploratory discussions after closed doors and in October Colombia officially announced the launch of peace talks in Ecuador with the guerrilla movement. An agreement is important because it is feared that the ELN will eventually take over FARC areas and drug trafficking. Between 2002 and 2007, ELN was already negotiating peace with the ELN.

The first talks were postponed earlier this year. The Colombian government first demanded the release of the hostage politician Odín Sánchez, who was detained since March 2016. The ELN left the politician in February.

How many hostages the group now has in his power is not known. In May last year, the movement held a Spanish journalist shortly. She was released after about a week. Later, the movement also left a cameraman and a reporter of the RCN television station, which were included when they made a program about the abduction of the Spanish. It is not known if any ransom has been paid for their release. In early 2015 an Arnhemmer was abducted by members of the ELN. He came free after weeks. It is also not known whether ransom was paid.