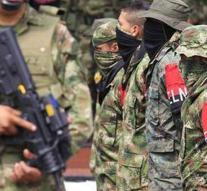 bogota - At least five Colombian soldiers were killed on Tuesday by a bomb attack, carried out by the Marxist ELN rebels. Also, more than ten soldiers were wounded by the attack near the border with Venezuela, according to the army.

The attack came a day after the National Liberation Army (ELN) said it would observe a unilateral cease-fire during the parliamentary elections next month. The government had said that such a gesture was needed to restart the stalled peace talks between the two parties.

During the attack the guerrillas used 'an explosive' against military vehicles on the road between the cities Tibu and Salazar de las Palmas in the province of Norte de Santander.

The government stopped the peace talks with the ELN in January, after the end of a first ceasefire by both sides, when rebels resumed attacks on security forces and oil pipelines. Eight police officers were then killed.

The 2000-strong group was founded by radical Roman Catholic priests in 1964. The United States and the European Union regard the ELN as a terrorist organization.