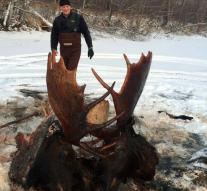 alaska - A man from Alaska found in a frozen river to two moose. The animals are presumably drowned during a fight for a female.

Jeff Erickson, who found the frozen animals, posted pictures on Facebook. Then we see that stuck the moose with their antlers together, so they could not get out and drowned the water according to Erickson.

Erickson decided with a friend to get the elk out of the ice, because he wanted to hang the antlers on his wall. 'We've gotten out. Now they're clean,' he wrote on Facebook at a photograph of the decapitated animals.