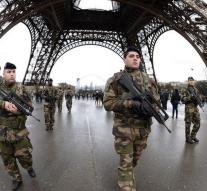 paris - In France, eleven terrorist attacks have occurred since the beginning of the year. This shows that the threat of terrorism has not diminished, Interior Minister Gérard Collomb said on Friday at the installation of DGSI Security Director General Laurent Nunez.

The French newspaper Le Parisien reported that, according to a source close to the file, the last attempt last week was dismissed in Saint-Ouen when security forces held a person who wanted to attack the warden. At the beginning of July, the counter was on seven guilty attacks.

'Eleventh attacks have been canceled since the beginning of the year, and of course tomorrow may happen in France what happened in Barcelona,' said the minister, aiming at the assault with the 16-seat van on 17 August. 'We see the importance of the threat and balance that needs to be struck between security and freedom,' he added.