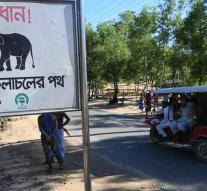 dhaka - Wild elephants have killed four refugees, three children and a woman, died when they were robbed by a provisional shelter for Rohingya in Bangladesh. Four wounded had to be taken to a hospital.

The police of the Cox's Bazar region said Saturday that the herd had destroyed several tents and huts near Ukhiya. More than half a million Rohingya, an Islamic minority in predominantly Buddhist Myanmar, has crossed the border since August for fear of attacking the army in their villages.