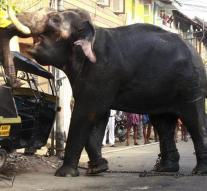 coimbatore - An elephant killed four people in the south of India on Friday morning. The animal trampled near the city of Coimbatore a twelve-year-old girl, two women and a farmer, reported the newspaper Times of India.

The elephant arrived early in the morning on Friday morning. There the animal trampled the girl who was sleeping for her house. The elephant then killed the three adults. The animal also injured five other people.

About a hundred nature conservationists and police officers went to the elephant on Friday. They succeeded in stunnling the animal. Presumably, the elephant is turned back in a safe place.