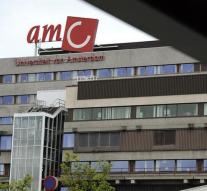 amsterdam - The Academic Medical Center (AMC) in Amsterdam has developed an electronic 'nose' that can smell or what kind of lung disease someone has. The SpiroNose detects the substances in the exhaled air.

The detective seems to be an outcome: according to the AMC, many people with lung complaints are inconvenient to make the correct diagnosis, which often causes the good treatment to start too late.

According to a spokesman, the nose shows the correct diagnosis in nine out of ten cases. The device can further predict for lung cancer patients whether so-called immunotherapy attacks.

'For many new and expensive drugs, there is no test to determine which drug is used by any patient. The treatment is then a time-consuming and costly search, 'says Rianne de Vries, research director at the AMC. 'The SpiroNose can change here. '

It is expected that the nose in the future will be able to sniff into the patient's breath at the GP.