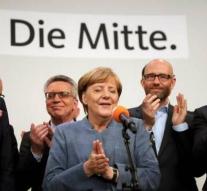 berlin - The German government parties suffered substantial losses during the parliamentary election of Sunday. The CDU of Angela Merkel and CSU sister party came together at 33 percent of the votes, the Social Democratic Co-operation Partners SPD received 20.9 percent support from the electorate.

The Alternative for Deutschland (AfD) received a total of 12.6 percent of the votes. That turned out to be the night of Sunday on Monday after the results of the 299 constituencies were counted. The right-populated AfD is thus the third party of Germany.

The outcome is a blow to Merkel's Christian Democrats. The joint venture of CDU / CSU received 41.5 percent of the votes at the previous parliamentary elections in 2013. The SPD then received more than a quarter (25.7 percent) of the electorate. The AFD just stayed below the electoral threshold of 5 percent, but still arrives in the Bundestag.

The Liberals of the FDP are again in parliament. The party lost all seats in 2013, but now received 10.7 percent of the votes. The party is seen as a possible coalition partner for Merkel, now the SPD has indicated its intention to conduct opposition in the coming years. The Grünen (Greens), representing 8.9 percent of the votes, are also mentioned as potential partners.