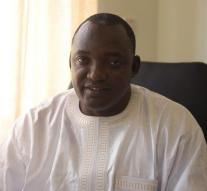 dakar - The winner of the Gambian presidential election has left for neighboring Senegal. Adama Barrow, according to a party member intends to return for his inauguration as president on 19 January.

After the presidential elections of December 1 last year, a political crisis erupted in Gambia. The long-serving leader Yahya Jammeh initially recognized his defeat, but changed his mind later. Efforts by neighboring countries to persuade him to resign, came to nothing.

It is unclear why Barrow, a former broker, was diverted to Dakar. Some supporters felt the politician himself vulnerable in his homeland, where Jammeh meanwhile the election trying declared invalid.

Barrow is backed by the West and the African Union. West African countries have threatened military intervention if Jammeh refuses to leave.