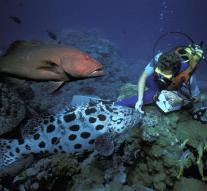 - Two elderly French tourists during a trip of a group of elderly people in Australia died. The 76-year-old man and 74-year-old woman had a heart attack when they were snorkeling. A third tourist would also be affected by heart failure but survived it.

The victims were among a group of 21 elderly people who took a trip on a catamaran. At the Great Barrier Reef off the coast near the city Cairns they went ashore to swim and snorkel. According to police, the two already suffer from problems with their health, and they were accompanied by a guide when they went into the water.