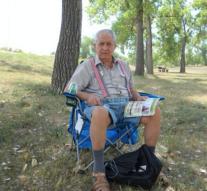 denver - A 82-year-old man from the US state of Colorado, who stuck in a lift for a month, was found dead. The older American pressed the emergency button twice, but nevertheless was not found on time. Neighbors broke alarm when they smelled a strange smell.

Isaak Komisarchik has been missing since 5 July and died between 6 July and 2 August. His body was found in a lift in a parking garage in Denver apartment where the man lived, reported US media. Because the doors of the elevator remained closed all that time, his death was not noticed before. Only when handmen broke the lift, the dusty surplus of Komisarchik was found.

The man suffered from dementia. Family members say the man was last seen on July 5th. That morning he went out to get the newspaper, but did not return.

Research indicates that Komisarchik has pressed the alarm button twice. Why then no help has appeared, is still being investigated. According to the authorities, there was nothing wrong with the lift. However, the hoist is temporarily closed.