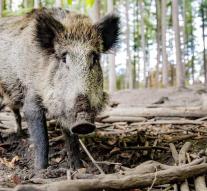 berlin - An 80-year-old German has slaughtered a wild boar with an ax in the parking lot of a Berlin supermarket. First the man chopped off the head of the animal. Then he began to take out the guts of the dead beast.

Bystanders warned the police. The man was arrested. He stated that he had slaughtered the animal to be able to eat good meat that he normally could not afford.

Wild boars are often seen in parks, gardens, streets and playgrounds in residential areas on the outskirts of Berlin.