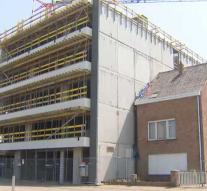 bredene - Although they are offered a few million, 86-year-old Louis and his partner refuse to leave their home in the Belgian coastal city of Bredene. In the meantime, an apartment complex is being built right next to their house, which looks rather remarkable.

The neighbors have already given in to the big money of the project developers a while ago, but Louis does not let his house demolish.

The elderly man built the house 56 years ago with his own hands and wants to wear out his old age. 'They can offer as much as they want, but what do I have to do with a few million at my age', the man in front of the camera tells VTM Nieuws.