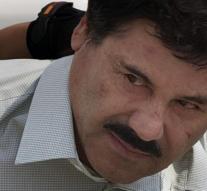 - Mexican drug lord Joaquin 'El Chapo' Guzmán has not yet resigned to his extradition to the United States. Guzmán's lawyers have lodged an appeal again according to the BBC against the decision.

The lawyers argue that Guzmán can not be extradited because he could face the death penalty in Texas. The question is how promising is the appeal. The US has already promised that the drug lord will not be put to death.

It worked authorities in Mexico previously to keep Guzmán behind bars. He managed twice to escape from prison.