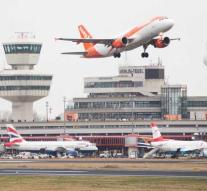 berlin - Several flights were canceled on Monday at various airports in the German capital Berlin. Due to a strike at security personnel at the Tegel and Schönefeld airports at 05.00...

Lufthansa announced that eight flights had been canceled from Tegel. In Schönefeld flights from Easyjet, Ryanair and Aeroflot have also failed. Passengers must contact their airlines.

The trade union Verdi, which had called for the strike, does not rule out further actions at German airports.