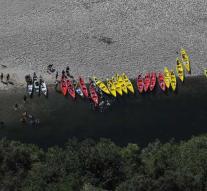 nice - Pia Douwes is being pampered in Thailand. The musical star, who gives a one-off concert in the Thai capital Bangkok next week, called the reception 'overwhelming.'

Furthermore, about twenty people are stuck on two campgrounds located near the Ardèche. The authorities take into account that the river outside the banks and therefore they want to evacuate the tourists.

The newspaper Sud Ouest reported that the safety of the twenty campers on Thursday afternoon was not successful because of the bad weather. Earlier, sixty other tourists from the two campgrounds were evacuated.