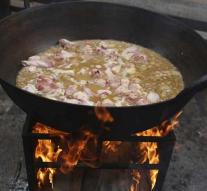 lima - At least eight people died after attending a vigil in Peru. Local hospitals report that fifteen other patients are seriously ill. They would have feasted on a stew with meat, the BBC reports.

The victims were present at the vigil for a dead man. A senior health official said that people became unwell a few hours after the ceremony. These include two sons of the deceased and the mayor of the place in the Ayacucho region.

Specialists have been sent to the area to find out what the source of the contamination is. In local media it is speculated that possibly rat poison or insecticide was eating.